The use of drones for aerial based tasks is becoming commonplace. From surveys, to scanning of structures, or as simple as taking photos for inspections. But as more companies send their flying servants into the air, the need for greater situational awareness increases.

Launched last year, AirMap‘s sole aim was to map the world’s lower airspace where drones are allowed to occupy. First starting with the controlled airspace around airports, and more recently AirMap has announced that real-time traffic alerts are now available.

AirMap’s mapping data is so good that other companies such as 3DR and DJI have already incorporated it into their products, as too have other mobile app developers.

In addition to the web browser app, mobile apps on both Android and iOS are available.

The interface is very clean and to the point. Starting with the map your location is found using GPS. If no restricted airspace is found then the app header is highlighted in green. But, activating the Layers shows us that other airspace data may be turned on/off. When those layers are toggled on, more data is overlaid on the map. 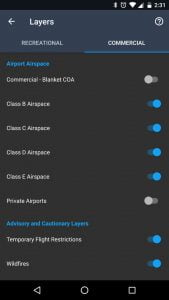 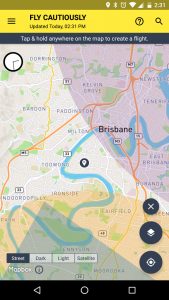 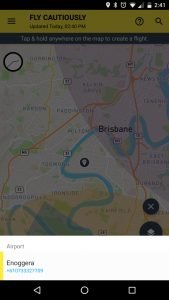 Once you are satisfied that you have clearance to fly, long pressing on the map presents the Flight Details where a flight can be logged. Basic details about the flight are entered, including your name and aircraft. In the interest of safety and disclosure, your flight can be shared publically so that others viewing the map will see that you will be occupying certain airspace at a certain time, as well as airports being notified of your flight if they are taking advantage of the AirMap services. 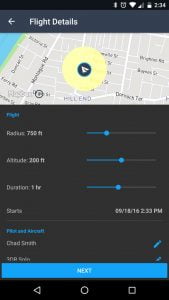 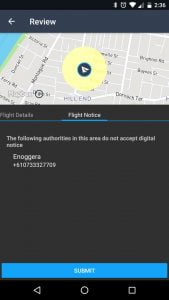 And this goes to the heart of the problem AirMap is trying to solve, ensuring that you are as informed as possible of your surroundings, as others are of you. Systems such as this with collaboration from airports and responsible drone pilots will provide important situational data ensuring airspace is safe, at least for the near future.