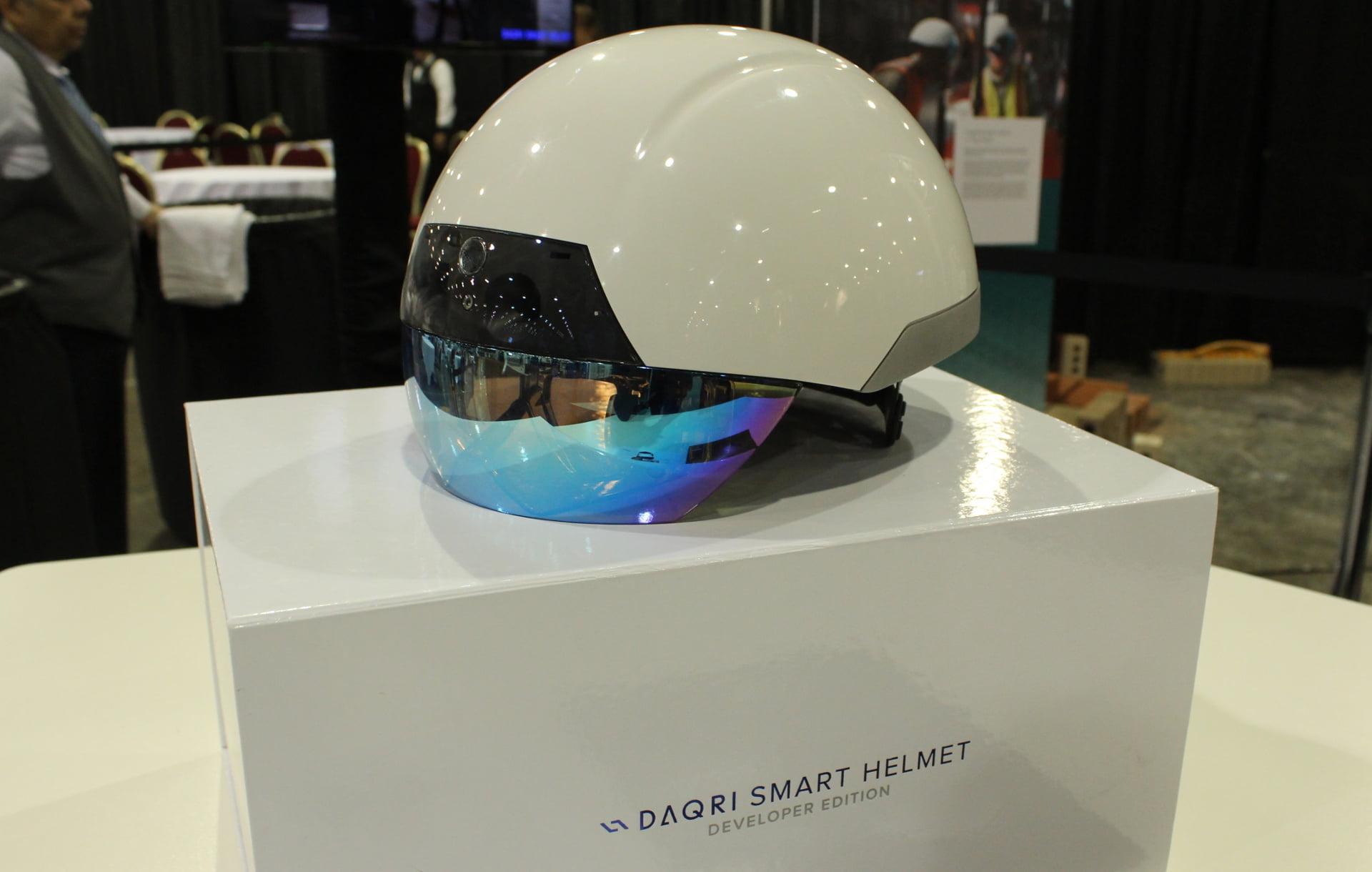 As a professional in the AEC industry, conferences and similar events provide the ability to hear about upcoming technologies, explore existing ones, and get an overall feel for industry trends. At this year’s Autodesk University those trends were ringing loud and clear that reality capture and mixed reality were still hot topics. From laser scanners, to virtual reality headsets, and the mixed reality headset of Microsoft HoloLens. But none of these excited me quite as much as when I saw DAQRI with their smart helmet, which I just had to try out.

The DAQRI smart helmet is one part reality capture, one part mixed reality, and one part data integration. As an aside, the term mixed reality is often interchanged with augmented reality, although the generally excepted difference these days is that mixed reality anchors the digital and physical objects together to act as one. This is where DAQRI has focused its efforts.

It’s an impressive piece of kit. The front of the helmet features a high-speed wide-angle tracking camera, an Intel Realsense depth sensor, and thermal camera. Behind the scratch-resistent visor is the head-up display. Both the outer shell of the helmet and visor meet the safety standards for personal protective equipment.

With the assistance from DAQRI’s Sr. Director of Industrial Solutions, Jeff Dymond, I eventually had a chance to see why their exhibit demanded so much attention from conference goers. The immediate thing you notice when first fitting the helmet is that it has a little bit of weight to it, more than a standard hard hat, but not too overbearing. Given the smarts built into it the extra weight is quickly overlooked.

The head-up display was quite easy to view through and it didn’t feel as though my field of view was obscured, which could be an important safety factor for locations such as construction sites. Then the display became active. In this example the digital object sat just above the floor, and the built-in inertial measurement unit helped with tracking as I moved my head around the digital scene.

Navigation of menus was done through the head-up display by simply moving the head to hover over a button for a few seconds. Jeff directed me to activate the thermal camera where I could then see a heat map of people and even recent footprints on the floor.

The future is closer than you think

The application of such technology is vast. Especially in the construction industry where we have been promised for years that we will be able to augment our BIM over the physical building either as part of the construction process, or even afterwards for maintenance purposes of services. The DAQRI smart helmet looks like it might just fulfill that promise, among its many other uses.

I can see coordination meetings instead of sitting behind a computer, being on a job site with helmets on.
– Bryan Bornetun, Parsons Electric

But where it starts to become even more compelling is when mixed with data from other systems, not just a model. Recently DAQRI partnered with Autodesk and Mortenson Construction to integrate Autodesk’s BIM 360 tools as part of a case study. The result was literally overlaying the BIM and construction management data onto the physical, providing real-time context, something which cannot be done from an office.
One can only imagine the rich data which could be served up to a facilities/asset manager.

The relevance of Google’s ‘Project Tango’ to the AEC industry

What’s next for Autodesk BIM 360 Docs